Haven't been writing journal entries, though. Not totally sure why, except this has been an exceedingly demanding year. It wanted a lot of me.

So tomorrow is June, which is the month another Clarion West workshop begins. So, yes, I'm busy. Getting ready for the workshop (only three more weeks), trying to wrap up my U of WA projects by the end of the academic year (only two more weeks), writing, reading.

Also, tomorrow being June means that today was my grandmother June's birthday. Were she still among us, she would have been either 109 (her count) or 113 (the world's count). Not sure why shaving four years off her life made a difference to her, but at some point it did and she stuck to it. We didn't find out until after she died that she'd been doing that. We also found out a whole lot of other things but that's family stuff and of little interest to anyone but us so I won't go there.

But here, let me show you my grandmother, so you can see why despite her eccentricities about age, she inspired me (as she was clearly inspired by Isadora Duncan): 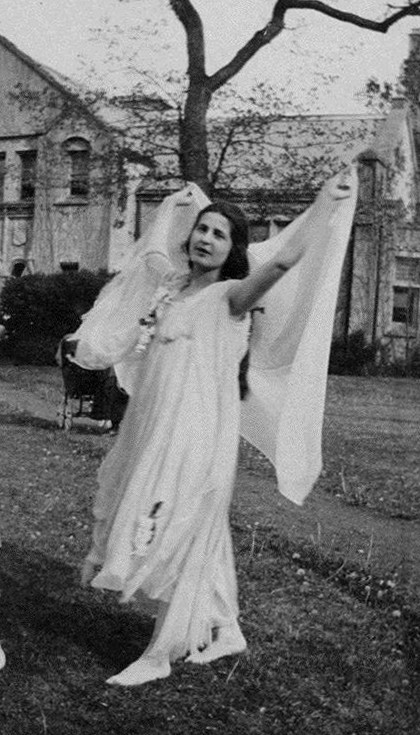 and here's my poem about that photograph.

The wind tonight is not quite spring but holds
a fragrant hint of soil, and blind shoots
wake to that scent.
In gusts at once warm and cool
there is no room for bare feet or women like white birds
in Grecian gowns. It's not yet May and sixty-five years
have spun by. She's dead, who in this photograph presses
naked feet against grass, raises arms to dance,
a white shawl drifting like feathers from her hands.
She knows nothing yet. Her confidence, tender
as a bird's.
I can't trust the web spun between us
to bind her, it's stretched over so many years.
Looking at this girl, I wonder how much I would explain to her,
how I could warn her that her first child will be still-born.
Defying the doctor to conceive another, she'll take a pin
to the French safe he made her husband wear. Her daughter
will bear me and I will remember her old in the mahogany bed
lying in regal darkness at the curving hall's end,
never dreaming of this white-gowned girl with waist-long hair
stepping into the history of her life

and mine. The wind pushing through her to me
is fecund with dreams and mud and doesn't tie us. Each movement
I make toward her is another step in her dance, another breath
of wind pressing her forward into the season.
I remember gathering
her sweeping hair into a widow's bun. Her hair still dark as
distance, yet light as birds and the girl I create of her.